Cricket runs in Bollywood superstar Saif Ali Khan’s family. While the ‘Omkara’ star failed to follow his late father Mansoor Ali Khan Pataudi’s footsteps to become a cricketer, he makes sure he enjoys watching the sport with immense passion. On Tuesday, he along with his wife Kareena Kapoor Khan and son Taimur went to watch India vs England first ODI match in London.

Taking to Instagram, Kareena dropped a string of images from The Oval stadium. In one of the images, Saif is seen sharing smiles with West Indies’ legendary cricketer Gordon Greenidge. “Genius,” Kareena captioned the post, adding a red heart emoji to it. She also posted a picture of her firstborn Taimur, who happily posed for the camera at The Oval.

Taimur wore a checked white and red shirt and paired it with blue denims and sneakers. The field with players was seen in the background. “My first match (red heart emoji) India vs England (red heart emoji),” Kareena wrote alongside the image.

In another picture, Taimur is seen sitting next to his father and Karisma Kapoor’s son Kiaan Raj Kapoor. While Saif smiled looking towards the field, Taimur made a face. Sharing the photo, Kareena wrote, “What are you doing Tim?” 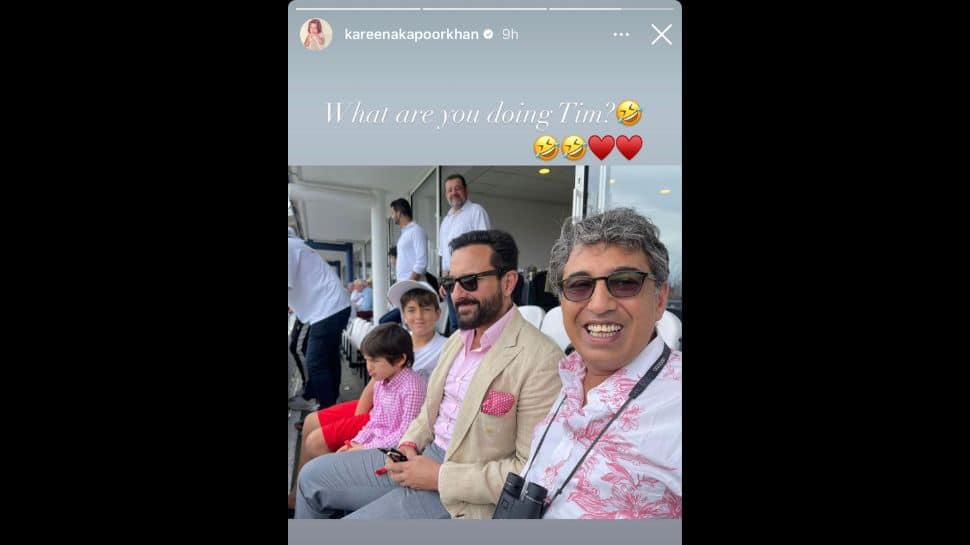 Interestingly, Saif and his former wife Amrita Singh’s son Ibrahim has picked up some cricket skills from his legendary grandfather. Ibrahim has often been photographed playing cricket with his friends. In fact, during an appearance on Kareena Kapoor’s talk show, Ibrahim’s grandmother, Sharmila Tagore, said, “Ibrahim is the only one who looks like a Pataudi. He is kind of tall and he likes cricket.”

He recently assisted Karan Johar during the shoot of ‘Rocky Aur Rani Ki Prem Kahani’. Now it’s to see whether Ibrahim would choose cricket or step into the film business like his father.