SunRisers Hyderabad chased down a paltry 69-run target against Royal Challengers Bangalore in just eight overs to register a thumping nine-wicket win at the Brabourne Stadium on Saturday.
Marco Jansen and T Natarajan bagged three wickets each to bundle out RCB for 68 runs and pave way for a comprehensive win for SRH.

The victory boosted SRH’s net run rate (NRR) big time and helped them to climb to the second spot on the table. They are tied on 10 points with Rajasthan Royals and Royal Challengers Bangalore but have a better NRR of 0.691 while Rajasthan have 0.432 and RCB 0.472.

Notably, SRH are only behind Gujarat Titans, who jumped to the top of the points table with the 8-run win against KKR on Saturday. 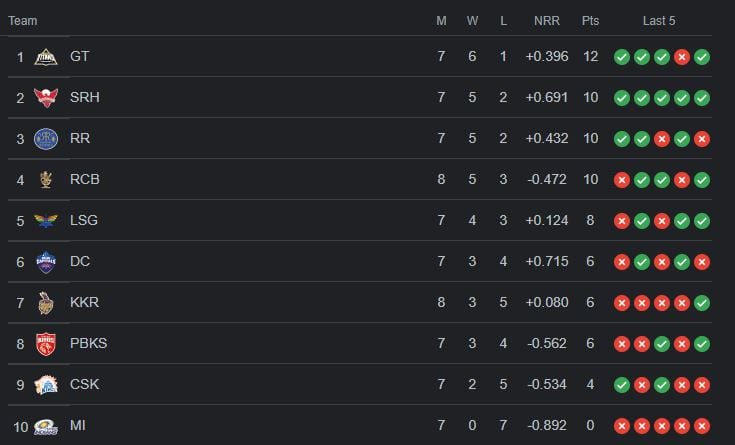 Rajasthan Royals opener Jos Buttler continued his rich form as he smashed his third century of the IPL 2022 against DC on Friday. He continues to hold on to the IPL 2022 Orange Cap with 491 runs in 7 matches so far with three hundreds and two fifties.

Meanwhile, GT skipper Hardik Pandya climbed to the second spot in the tally after he hit 67 runs against KKR on Saturday. Pandya now has 295 runs in his kitty which includes three half-centuries.

Third on the list is KL Rahul, who has scored 265 runs in the tournament so far.

The Purple Cap currently belongs to Yuzvendra Chahal, who has picked up 18 wickets from 7 matches so far.

Notably, SRH pacer T Natarajan moved to second place with three wickets against RCB. He now has 15 wickets to his name.