KL Rahul’s Lucknow Super Giants jumped into the 4th positions on the IPL 2022 points with their 5th win of their debut season, thrashing five-time champions Mumbai Indians on Sunday (April 24). LSG jumped over Royal Challengers Bangalore, thanks to their superior NRR of 0.334 as compared to -0.472 of Faf du Plessis’s side.

Rohit Sharma’s MI remained in the 10th and last position losing their eight match in a row this season. MI remain the only side in the IPL 2022 not to have won a single match so far.

Gujarat Titans continue to lead the way on the points table with 12 points from 7 matches this season with 6 matches while Sunrisers Hyderabad and Rajasthan Royals are on second and third position. Punjab Kings will look to move to 8 points when they face Chennai Super Kings in Match No. 38 of the IPL 2022. Ravindra Jadeja’s side currently have 4 points from 7 matches so far. 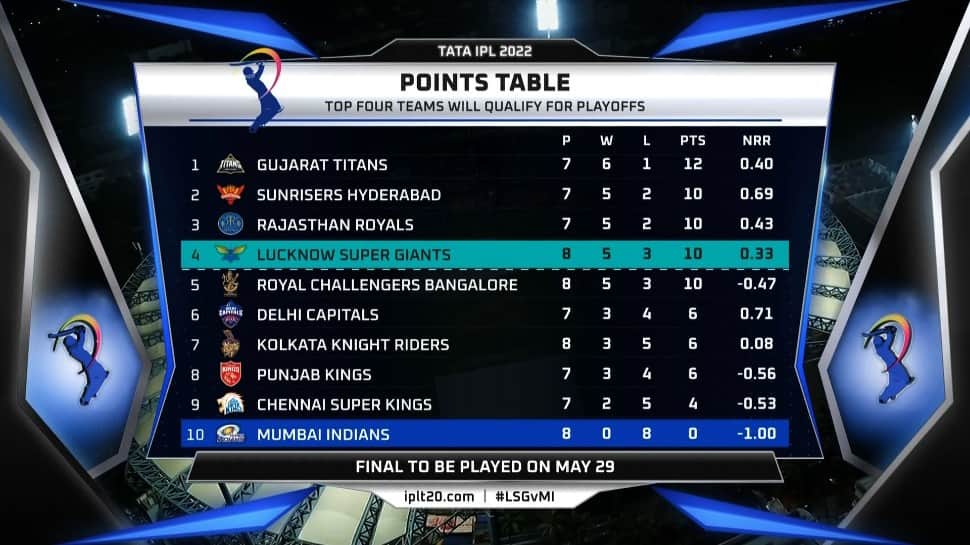 Rajasthan Royals Jos Buttler is miles ahead on the Orange Cap race at the moment with 491 runs in 7 matches so far with three hundreds and two fifties. Buttler is averaging 81.83 in IPL 2022 and has a strike-rate of 161.51.

LSG skipper KL Rahul joined Buttler as the second batter to score multiple hundreds in IPL 2022. With his second ton of the season, Rahul now has 368 runs from 8 matches at an average of 61.33 with 2 hundreds and 1 fifty. Rahul has a strike-rate of 147.79.

Gujarat Titans captain Hardik Pandya is in third position on batter’s list with 295 runs in 6 matches at an average of 73.75 with three fifties with a strike-rate of 136.57.

The IPL 2022 Purple Cap currently belongs to Rajasthan Royals leg-spinner Yuzvendra Chahal, who has 18 wickets from 7 matches at ana average of 11.33 and a best of 5/40 including a hat-trick. Sunrisers Hyderabad pacer T. Natarajan climbed to 2nd spot in the list with his fine spell against Royal Challengers Bangalore on Saturday (April 23).