Defending champions Chennai Super Kings continue to remain in the 9th position on the IPL 2022 Points Table after their 11-run loss to Punjab Kings in Match No. 38 in Mumbai on Monday (April 25). CSK are just above Mumbai Indians with 4 points from 8 matches with just two wins to their name so far.

Mayank Agarwal’s Punjab Kings moved into the 6th position, thanks to their 4th win in 8 matches. PBKS have also lost 4 matches so far and have 8 points to their name.

Rajasthan Royals can go to the top of the table on Tuesday (April 26) with a win over Royal Challengers Bangalore at the MCA Stadium in Pune. The Royals have 10 points from 7 matches but a win will put them level with Gujarat Titans on 12 points with only NRR separating the two.

Faf du Plessis-led RCB, on the other hand, can also reach 12 points if they manage to defeat Sanju Samson’s side on Tuesday. However, their poor NRR will prevent them from going to No. 1 position. 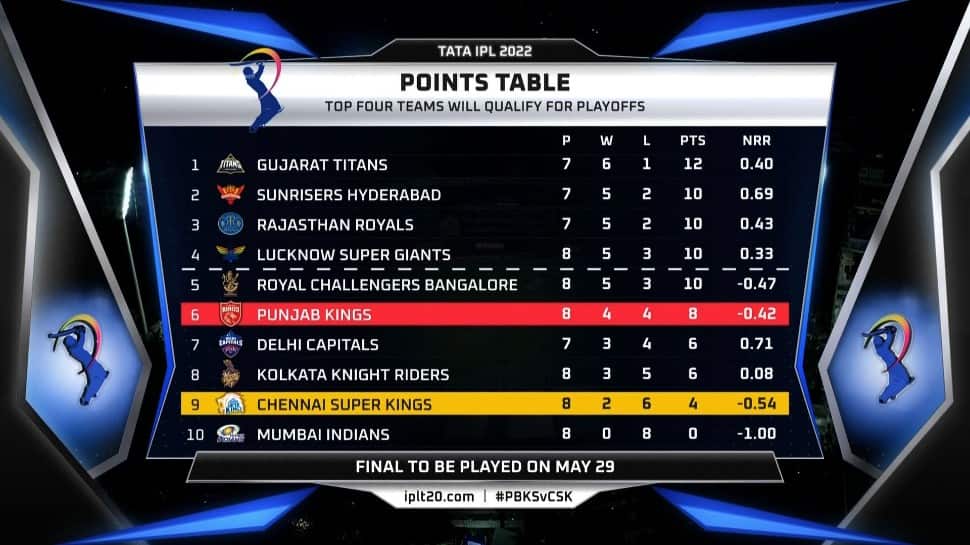 Rajasthan Royals opener Jos Buttler will look to increase his lead at the top of the Orange Cap table, when he face RCB side. Buttler has 491 runs from 7 matches so far, including 3 hundreds and 2 fifties.

PBKS opener Shikhar Dhawan rose to the third place in the batters’ list thanks to his 88-run knock against CSK. Dhawan now has 302 runs from 8 matches at an average of 43.14 with two fifties and a strike-rate of 132.45.

Lucknow Super Giants skipper KL Rahul is in 2nd position with 368 runs from 8 matches at an average of 61.33 with two hundreds and 1 fifty.

Bravo picked up 2/42 against Punjab Kings on Monday. Sunrisers Hyderabad pacer T. Natarajan is in 2nd place with 15 wickets from 7 matches at an average of 14.53.