Indian Premier League (IPL) debutants Gujarat Titans returned to the top of the 2022 Points Table with their 7th win out of eight matches. GT now have 14 points – the only team so far – after defeating Sunrisers Hyderabad by five wickets in Match No. 40 of IPL 2022 on Wednesday (April 27).

GT jumped over Rajasthan Royals, who have 12 points from 8 matches, and have a NRR of 0.371 after Wednesday’s win. SRH, though, remained in third spot on the Points Table and have 10 points like Lucknow Super Giants and Royal Challengers Bangalore.

But Kane Williamson’s Sunrisers have the best NRR out of the three other teams – 0.600 – with 5 wins from 8 matches so far. Delhi Capitals will face IPL 2021 runners-up Kolkata Knight Riders in Match No. 41 on Thursday (April 28).

Both teams are currently on 6 points each and will look to join Punjab Kings on 8 points after Thursday night’s clash. Check IPL 2022 Points Table after SRH vs GT match here… 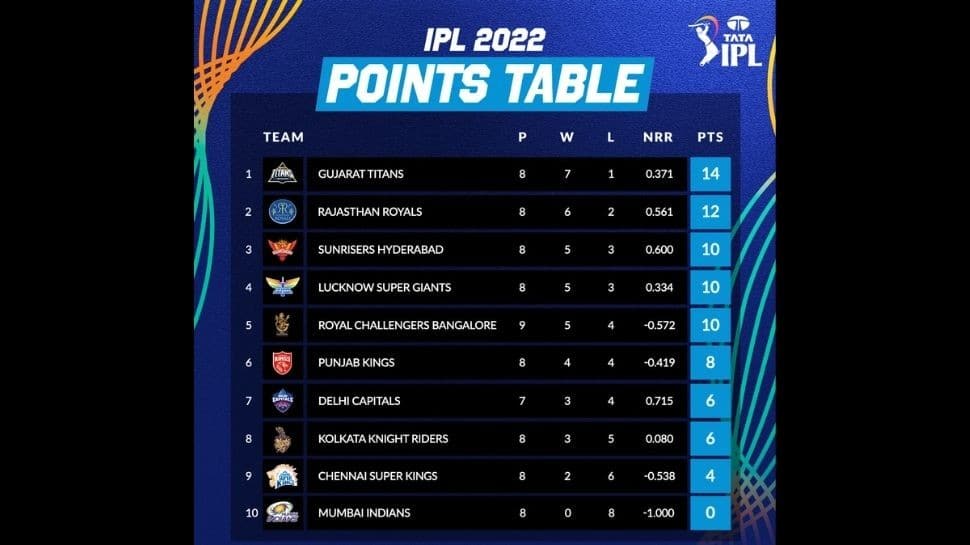 Hardik had a lean outing against SRH, scoring only 10 runs off 6 balls. Lucknow Super Giants skipper KL Rahul remains in 2nd place on the Orange Cap list with 368 runs from 8 matches at an average of 61.33 with 2 hundreds and 1 fifty.

Rajasthan Royals leg-spinner Yuzvendra Chahal continues to lead the bowling charts with 18 wickets so far from 8 matches. But pace sensation Umran Malik from SRH zoomed into second place with his maiden five-wicket haul on Wednesday night.

Malik now has 15 wickets from 8 matches at an average of 15.93 after claiming 5/25 against Gujarat Titans. Teammate T. Natarajan failed to add to his wickets haul, ending up with 0/43 and remains in 3rd spot with 15 wickets but win a higher average of 17.4.