Mayank Agarwal’s Punjab Kings were already out of IPL 2022 Playoffs race but managed to end up in 6th place on the Points Table with their comprehensive five-wicket win with 29 balls to spare against Punjab Kings in Mumbai on Sunday (May 22). PBKS ended up with 14 points from 14 matches – same as Delhi Capitals but finished 6th due to a poor NRR of 0.126 as compared to 0.204.

SRH, who had a rollercoaster season, finished in 8th place with just 6 wins and 8 losses to their name. SRH finished ahead of MS Dhoni’s Chennai Super Kings and Rohit Sharma’s Mumbai Indians. Bhuvneshwar Kumar-led side were level on points with IPL 2021 runners-up Kolkata Knight Riders but Shreyas Iyer’s side had a better NRR – 0.146 as compared to -0.379 of SRH.

The four playoff spots were already decided on Saturday (May 21) after Delhi Capitals’ loss to Mumbai Indians. Gujarat Titans ended up at No. 1 position, followed by Rajasthan Royals, Lucknow Super Giants and Royal Challengers Bangalore.

Qualifier 1 between the Titans and the Royals will take place at the Eden Gardens in Kolkata on Tuesday (May 24). 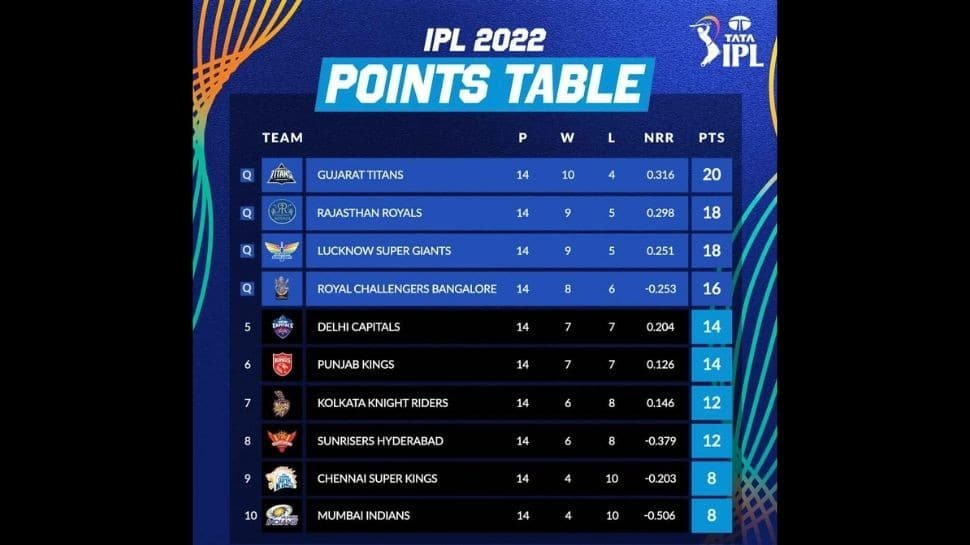 Teammate Liam Livingstone finished in sixth place with 437 runs from 14 matches with 4 fifties and a strike-rate of 182.08. LSG openers KL Rahul and Quinton de Kock are in 2nd and 3rd place on the Orange Cap table with 537 runs and 502 runs respectively.