Lucknow Super Giants (LSG) are set to lock horns with Royal Challengers Bangalore in the IPL 2022 Eliminator today (May 25) at the Eden Gardens in Kolkata. Both teams will look to take another step towards the qualification as the winner of this game will take on Rajasthan Royals in the second qualifier that is scheduled to be played at Narendra Modi Stadium in Ahmedabad. However, the team which will lose today will be eliminated from the tournament.

Meanwhile, the fans will be worried about the weather in Kolkata as the city is going through a phase where it is seeing incessant rains in the evening after being largely hot throughout the day.

But, the good news for fans is that the chances of rain during the night is only 4%, contrary to 65% chances during the daytime. In all likelihood, there will be rain at Eden Gardens during the day, however, it is expected to be a clear sky once the match’s commencement nears. 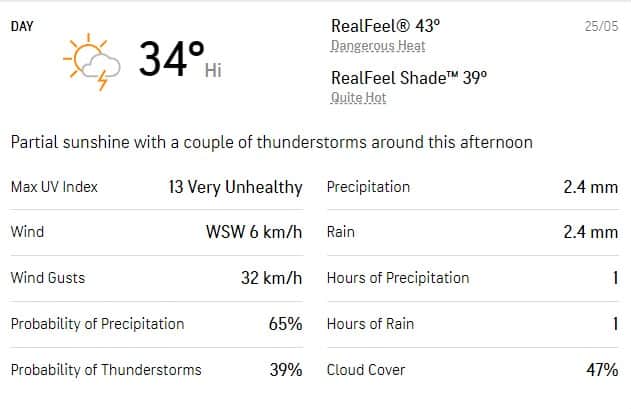 Moreover, Eden Gardens has an amazing drainage system which means that the game will take place even if there are light showers ahead or during the match.

What happens if the game gets washed out?

Lucknow Super Giants will enter the IPL 2022 Qualifier 2 if the game gets washed out, while RCB will get eliminated.

As per IPL guidelines, “The number of overs in the playoff match may, if necessary, be reduced so that each side has the opportunity to bat for five overs. For the Eliminator and each Qualifier playoff matches, in the event that it is not possible to schedule a five-over match to complete by the end of the extra time on an original day, the teams will, if conditions permit, play a Super Over to determine the winner of the relevant Eliminator or Qualifier match. If the Super Over is not possible the team that finished highest in the league table after the 70 matches of the regular season shall be declared the winner of the relevant play-off match or final.”

Hence, if a super over is not possible then LSG will make it to the Qualifier 2 as the KL Rahul-led team finished third on the points table while RCB were fourth in the tally.